Marian Keyes' venture into cookbook writing was a wise move! The recipes contained in Saved By Cake are varied and interesting, and the advice accompanying each one is simply helpful. What caught my eye were the Wasabi and White Chocolate Cupcakes with Salted Caramel Icing- doesn't this strange combination sound delicious! Unfortunately, having no wasabi in the house, meant my version lacked the essential flavour. BUT I (and Marian) highly recommend you try it, as I will for my next round. 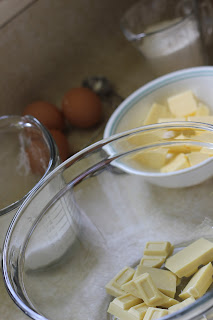 Preheat oven to 180C and line 12 hole cupcake tray.
Melt the chocolate in a heatproof bowl over a pot of boiling water (double boiler method). Be sure to heat up slowly as white chocolate has the tendency to burn.

Add the butter to the bowl and stir until melted.
Remove from the heat and stir in the sugar. It will look clumpy at this stage but do not be worried.
Let the mixture cool for 10 minutes then stir in the vanilla essence.
Beat in an egg at a time with an electric mixer until each one is well combined.
Double sift the dry ingredients. (I actually triple sifted as Marian recommends to get as much air in there as possible). Gently fold into the wet mixture. It will look very liquid at this stage. I was a bit concerned but they still turned out well!
Divide mixture among cupcake tray. Bake for 20 minutes. Mine were in there for 22 minutes. Result: slightly browned cupcakes. 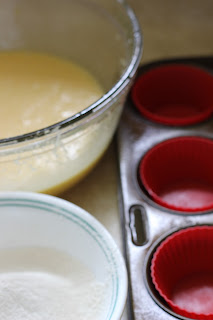 To make the icing, place all ingredients into a saucepan and melt over a low heat.  When butter and sugar have melted, raise the heat. Whisk briskly until mixture starts to bubble, but do not let it boil. Keep it at this point for 5 to 8 minutes, until it thickens. Be careful as it will be very hot!!!
When the mixture has cooled down but is still liquid, spread over the cupcakes. The mixture I produced as quite runny so take this step slowly so it doesn't all spill down the sides.
Once iced, sprinkle with a little coarse sea salt- and voila! The soft sweet cupcake goes so well with the salty toffee. And feel free to adjust amount of salt in the icing depending on your taste.

Ginger. Love. Care.
My name is Gina (initials GLC). I need a creative outlet and to share with others my love of healthy, delicious, simple food. If you have any thoughts or suggestions, please share.